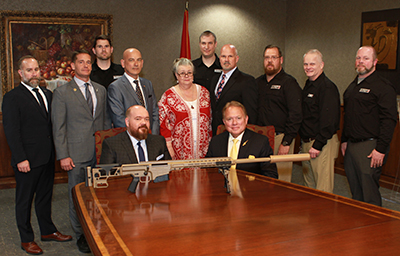 Murfreesboro, TN: U.S. Department of Defense announced Monday, March 11th, 2019, that Barrett Firearms Manufacturing Inc. has been awarded the contract for ASR (Advanced Sniper Rifle) in support of the U.S. Special Operations Command (USSOCOM) with its MRAD (Multi-Role Adaptive Design) Rifle. USSOCOM announced in 2016 they were in search of a modular, multi-caliber bolt action sniper rifle capable of converting between 7.62x51mm, .300 Norma Magnum (NM) and .338 Norma Magnum (NM) through a “full and open competition.” The Barrett MRAD is designed with precision and modularity in mind and will serve the U.S. special operations teams in their efforts. “I remember Chris telling me that ‘this is what all precision rifles will look like one day!’ and he was right. However, aesthetics is not all that makes this rifle; as his development persisted, he was able to achieve more than I ever thought possible. I genuinely believe this is the most accurate rifle in the world.” Ronnie Barrett, Founder and CEO. There has never been a time in US History that both a father and son have each fielded a military-designated rifle system until now: Ronnie with the M107 and Chris with the MRAD. “This feels like the highest honor I could ever achieve professionally to have a rifle adopted by the US Military, and especially USSOCOM,” Chris Barrett, President.